The Number 55: Fibonacci Numbers & the Role of the Sunflower 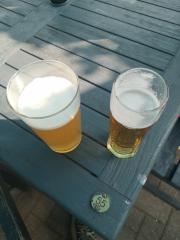 Each post that I have written has been inspired by a number that has occurred naturally during my everyday life. My husband, Howard, and I were cycling out for lunch on what may well be the last sunny day of the year in the UK. Our table at our chosen pub just happened to be number 55. I have been writing this blog for just over a year and the number 55 is easily the most interesting number I have come across. Numbers are deceptive like that!

The number 55 stands out because it is a Fibonacci number. The Fibonacci sequence is the series of numbers:

where each number is found by adding the previous two.

Why are Fibonacci numbers so interesting? Firstly, Fibonacci numbers occur widely in nature. On many plants, the number of petals is a Fibonacci number: buttercups have five petals, lilies and iris have three, some delphiniums have eight, corn marigolds have 13, some asters have 21 and daisies can be found with 34, 55 or even 89.

Further, the Fibonacci series is connected to what is known as The Golden Ratio or phi = φ which is often called “The Most Beautiful Number In The Universe”. The Golden Ratio is approximately 1.618 and is found in the Fibonacci series by dividing a number by its predecessor. Interestingly, if we consider this division after the number 55 in the series and take the result to three decimal places we will always get the fixed number 1.618.

The Golden Ratio is found in nature (including the human body), plants and art.

A sunflower grows in opposing spirals, the ratio of one rotation’s diameter to the next is 1.618. Alan Turing carried out fascinating work with nature. In 1951 he mused that the spiral shapes on the heads of sunflowers seemed to follow the Fibonacci series, prompting his proposal that by studying sunflowers we might better understand how plants grow. Like much of his work, this research was cut short by his sudden death in 1954.

This links to my upcoming book (co-authored with Howard), Enigma Uncovered.

Such interesting behaviour is not just found in sunflower seeds. Leaves, branches and petals can grow in spirals. Often this is so that new leaves don’t block the sun from older leaves, or so that the maximum amount of rain or dew gets directed down to the roots. However, nature has many different methods of survival so these characteristics are not seen on all plants.

φ occurs in art and architecture. The Golden Ratio was probably most used by artists and architects while building their masterpieces. The golden ration has been extensively used when creating

The golden ratio can be traced back before humans inhabited earth, for example, the skin folds of extinct dinosaurs, rare ancient insect segmentation and much more. I think you’ll agree that Fibonacci numbers give one of the widest, clearest and closest connection with the real world.

#Christmas can be demanding for many at the best of times, so we've decided to spread a little Christmas cheer by running a #giveaway on our Facebook!

Use the link below to be in with a chance to win a Family Pass & a visit to our Vintage #Grotto⬇️
https://fb.watch/h0czOp2ILM/

I really appreciate it when people point out errors in my work - e.g. my blog. Someone found a small one this morning & by correcting it I now look better & have thought about the issue more deeply. Below is the corrected post #FridayThoughts #blog
https://ammauthorship.com/650-the-chester-by-election-and-apocalyptic-numbers/

You'll need to be on spotify to run it