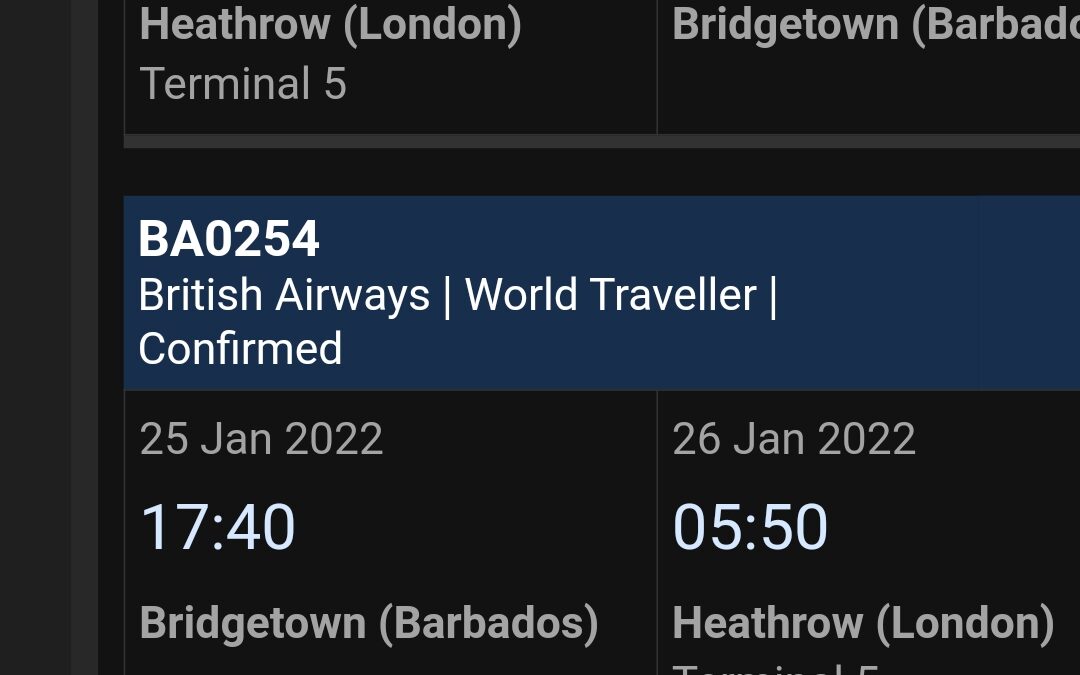 Today we (that is, my husband Howard and I) should have been in Barbados. We postponed the trip due to COVID and hope to be going out shortly. The flight out from Heathrow had the ID BA0255 as shown in the photo above. Until now I hadn’t given the numbers that airlines assign to their flights much thought: in fact, I believed them to be pretty much random, perhaps generated by a computer. But there is some logic to the process. For example, flights with even numbers tend to be going North and East whereas those going West and South tend to be assigned odd number. Our flight to Barbados would have been flying West so its odd number makes sense. Return flights often have a number one different to their outbound flight. You can see that our return flight from Barbados would have been BA0254. And, on top of this, it seems that an airline tends to give smaller numbers to flights it considers more important. Our connecting flights from Manchester to London had four digits (BA1371 outbound and BA1370 return) and so, I assume, were considered less important to the airline than the transatlantic flights to Barbados.

As with previous blog posts, I wondered where a given number would take me – in this case the number 255. We spent a few nights between Christmas and New Year staying in London near the Shard. The Shard is the UK’s tallest building and stands at 310 m. I wondered if there was a building anywhere in the world of exactly 255 m high and, if so, where it was. And I found one! It’s in Hong Kong, is the 14th highest building there and is the Langham Place Office Tower and has fifty-nine floors. I’ve been to Hong Kong and it’s full of very high buildings so this one must stand out.

I’m sad to say that I went up to the top of the World Trade Centre before 9/11. My Uncle used to work in New York and he generously took me (aged 12) and my family to about floor 107 for lunch. It was staggering to look down from that height and I’ll never forget it.

There are different criteria for skyscrapers. To qualify as a skyscraper a building must be over 100 m tall (and, according to some sources, over 150 m tall).

The Council on Tall Buildings and Urban Habitat (CTBUH) defines a ‘supertall’ building as one that is more than 300 m (there exist about three hundred worldwide today). Further, ‘megatall’ buildings are those exceeding 600 m in height. There are currently four of these: Burj Khalifa (828 m), Merdeka 118 (679 m), Shanghai Tower (632 m ) and Abraj Al-Bait Clock Tower (601 m)

I’ve enjoyed learning more about airline flight numbers and the meaning behind them. Most people are fascinated by tall buildings and are keen to take a lift to the top so they can get a good view of their surroundings.